HCM CITY - The third International Conference on Information Technology Outsourcing in Việt Nam will be held in HCM City in October.

Vietnam ITO conference will seek to promote the potential of the country’s IT industry as an emerging destination for innovation and offer a business matching platform for local and international buyers and Vietnamese vendors. 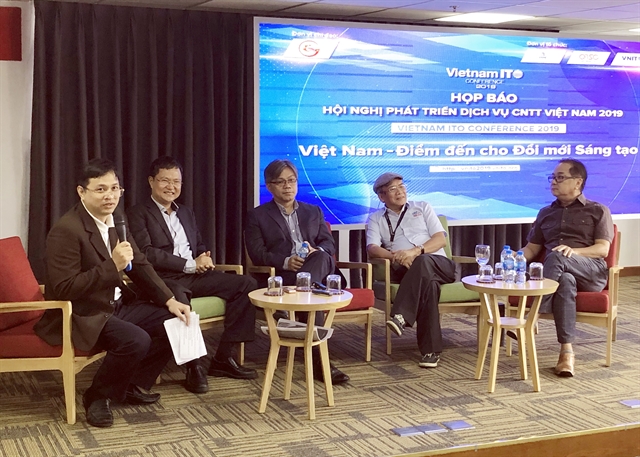 A press conference was held in HCM City on August 27 to introduce the Vietnam ITO conference 2019, which will be held at the Tân Sơn Nhất Saigon Hotel
from October 23 to 25. — VNS Photo

It would feature an international conference with more than 500 participants, business-matching sessions to connect Vietnamese software companies and local and foreign buyers, a technology exhibition, and visits to top IT companies and software parks among others, he said.

Artificial intelligence, blockchain, big data, the internet of things, digital transformation, and tech talent would be discussed, he said.

There would be two major panel discussions chaired by top experts from Japan and Korea, he said.

The technology exhibition is expected to have 60 booths, double the number two years ago, including nearly 30 by Korean and Japanese companies, who are keen to partner with Vietnamese IT companies.

Lâm Nguyễn Hải Long, honorary chairman of VNITO Alliance, and CEO of Quang Trung Software City, said: “Việt Nam has been very successful in the software outsourcing field over the past decade.

“International counterparts regard Việt Nam as an Asian hub for software outsourcing. Moreover, in recent years Việt Nam has implemented many new models and policies such as smart city model, creative cities programmes and start-up activities in response to the fourth industrial revolution.”

It is also a highly open economy, which enables its firms to reach large markets, he said.

As a country in the top 10 in terms of students studying abroad and with a large number of scientists working in developed countries, Việt Nam has favourable conditions to keep abreast of the most sophisticated products and technologies around the world, he said.

“Those conditions offer opportunities and premises for Việt Nam to become one of the centres for software development and innovation in Southeast Asia.”

Organised by the VNITO Alliance, QTSC, and the Investment and Trade Promotion Centre of HCM City, the biennial conference will be held at the Tân Sơn Nhất Saigon Hotel from October 23 to 25. — VNS